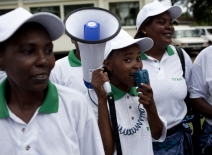 How to implement Clause 2 of ETI's Base Code, including a 5-step roadmap for companies.
Read more

"We don't need a union here - all our workers are happy!"

Freedom of association — the right of workers to join and form trade unions so that they can bargain collectively for their rights - is a fundamental principle of the ETI Base Code.

Yet around the world, both employers and governments interfere with these rights. Trade union leaders are denied promotion opportunities, physically abused, arrested or even murdered for standing up for their right to organise: the ITUC reports that in 2009, a total of 101 union leaders were murdered, and many more were physically assaulted.

In other cases, managers may threaten to close their factory or move production to another site if their workforce unionises, or refuse to negotiate with legitimate worker representatives.

The more subtle forms of interference include paternalism, where structures are created that may resemble unions, but are actually controlled by management in some form: for example, workers may be selected to be the representatives on workers' committees rather than democratically elected, or else company management may pay union fees.

In some cases, managers may formally recognise trade unions but then refuse to sit down and negotiate with them. Or they may spend six months negotiating the first clause of their collective bargaining agreement.

The absence of freedom of association at a workplace represents a clear breach of the ETI Base Code. As with any other type of breach, retailers and brands have a responsibility to work with their suppliers to find a constructive solution.

Ethical trade is not yet having an impact

But so far, ethical trade efforts have made little progress in furthering these rights.

This is partly because audits of workers' conditions often fail to identify their absence. For example, auditors may accept managers' word that they don't need a union, as workers' needs have already been met.

Or they may accept documents such as a collective bargaining agreement as evidence of the existence of freedom of association, without checking whether both sides ever meet.

In many countries there is a culture of fear and mutual mistrust between unions and employers, with the latter seeing unions as being out to destroy their business - and vice versa.

Another obstacle is that retailers and brands often have little understanding of how unions operate, and how a unionised workforce can benefit suppliers' businesses, and hence are ill-equipped to explain to their suppliers why it is so important, and how their business could benefit.

Tips on finding out whether freedom of association is respected

Yet suppliers that engage with unions find that they have fewer worker grievances to deal with, a more motivated workforce, lower turnover and less absenteeism - as well as fewer strikes.

Constructive worker-management dialogue can also be enormously helpful to companies seeking to trade ethically. Where there are strong trade unions with positive working relationships with management, they allow continuous resolution of problems as they occur, rather than letting them escalate and potentially become explosive media stories.

This means that buying companies that encourage their suppliers to adopt an open attitude towards trade unions stand a better chance of implementing their ethical trade responsibilities. In short, everybody stands to gain.

Furthering freedom of association and collective bargaining in supply chains is a key priority area for ETI. We are currently developing a major new programme of work to develop models of constructive management-union dialogue in supplier workplaces, and will widely disseminate the lessons we learn.

Empowering workers and employers to partner with unions has improved working conditions and industrial relations in Northeast Brazil’s fruit farms
How does a major department store with a huge and complex global supply chain embed worker representation across its own brand supply chain?
How ETI and its members reached out to all parties in a factory dispute in Turkey to build cooperation and trust.